The Research Iceberg… a hidden danger for writers and readers alike!

As a SF writer, research is an essential part of my work. But I sometimes do too much of it! 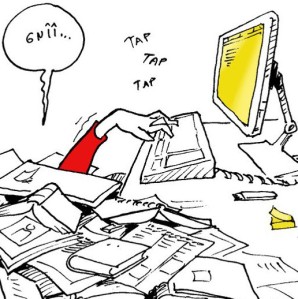 If the finished product is burdened with heavy lumps of exposition, those annoying scattered blocks will slow down the story  – and the reader’s interest.

Many people saying “You know, I don’t like science-fiction” are often more afraid of those lumps, than they would be  of a gripping story with warm-hearted characters affected by  loyalty conflicts.

Even for fantasy world-builders, the internal logic of the magic-or-supernatural workings requires a fair amount of thinking. And, as magical as the world is, the story must be well grounded in reality. How many fantasy novels, for instance, demonstrate a total lack of knowledge about equine biology and maintenance? One of my friends, who raises horses and loves fantasy, is appalled by what she reads.

And some SF or fantasy authors, too proud of their word-building, dump large exposition blocks on the unsuspecting reader! “I suffered for my art, and so must you!” 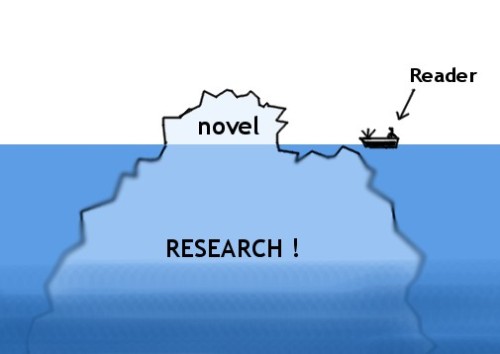 There is the emerged part, the novel that you enjoy. But whatever the number of pages, there is a larger, hidden part underwater.

Not enough research under it and your story collapses under the contradictions, impossibilities, logical errors and paper-thin characters.

But when the universes and societies are lovingly built, the strong foundation even allows other writers to participate in it! Two examples: The Darkover series by Marion Zimmer Bradley and the Honor Harrington series by David Weber have spawned many paper children.

According to the readers’ ages or familiarity with the concepts, the submerged part of the iceberg is around 90%. For a simpler story, you may choose to tone down the emerged part. A story aimed at children will be a smaller icebeerg. A vast work, like the Martian trilogy of Kim S. Robinson will be a huge iceberg!

Hal Clement, in my view,  left more of his research over the waterline… But that was the good ol-days of science-fiction writing! I found Needle, aimed at young adults, captivating, even when the concept of “teen” and “young adult” did not exist at the time!

In my latest SF novel, La spirale de Lar Jubal, aimed at YA, I set aside about 99%  of my painstaking research and physics calculations for the space station, to concentrate on the visual  and dynamic aspects, and on the character’s conflicts.

Nevertheless, I put some visual information at the beginning of the novel.

In my upcoming SF novel, aimed at the “Oh, I don’t like science fiction” crowd,  there are very few numbers, but more active descriptions of stunning settings and actions. The planet and science aspects are explained only by their impact on the characters’ lives.

And I must manage, of course, the sense of wonder…as this Winds of Tammerlan novel cover suggests. 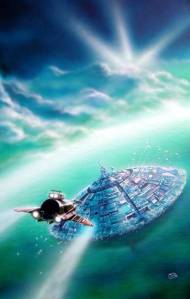 Another time, I will explain why science-fiction is like chocolate…

6 responses to “The Research Iceberg… a hidden danger for writers and readers alike!”