In these trying times, I need some comfort readings, which I get from some Star Trek novels.

I just finished Sarek, (a story with Spock’s dad), a tale with finesse and a touch of Pon Farr that enriches the universe of the original series. (I ignored the ST reboot at the cinema). There, we meet Amanda in depth, and learn about her love affair with Sarek. The novel shows up this Vulcans are not walking cold computers, not perfect, but people with their own emotions, tradition clashes, preferences, disagreements. But they settle their difference in a more zen manner.

As with “Vulcan Heart” by Josepha Sherman (another fine writer we lost in 2012) and Susan Shwartz (many thanks to you!), this reading leaves me with a strong impression that our humanity, sick with conspirators, hate groups, anti-vaccines and anti-science, would need Vulcans (and also the Bene Gesserit, but that’s another universe). Just the basic control of emotions and the philosophy would prevent many problems from even happening (what’s the logic in despising dark-skinned persons?) in addition to cleaning up most prejudices.

The only flaw in this book, alas, is that we can no longer thank its author … Ann Carol Crispin left to count the stars in 2013. It’s a shock when it is a contemporaneous author who disappears.

Has the same thing happened to you? What was your most shocking experience? Please, share your testimony, because I haven’t found my zen state yet. So many writers to be grateful to, so little time!

Fortunately, Ann C. Crispin and the other departed writers have left many books behind, like a trail of excellent chocolate chips leading to the stars!

Beat the heat with 10 refreshing books!

As the summer heat and Canada Day are upon us, most of you are looking for a place to spend your vacations… and for good science fiction adventure books to read!

So I look forward to dive into refreshing novels.

The choices are so much diverse than when I was a teenager looking for space adventures, and finding only guy’s adventures. I would say “white guy’s adventures” but in the 80s, male characters were on their way of getting more diverse, not so the female characters… (There were notable exceptions, and books from Ursula K. LeGuin that I  didn’t know existed at the time.)

When I dip into the waters of an enthralling story (like The Calculating Stars, by Mary Robinette Kowal ) and explore its depths, forgetting all about the outside world. It feels like this:

When you emerge from a powerful and moving story, gratitude floods you, along with a faint regret of having finished the book… but there are many other waiting!

And, speaking of good books…

The Space Travelers StoryBundle reunites several wonderful writers, and I am proud to be a part of it with one novel (Clouds of Phoenix, featuring a disabled heroine on planet Phoenix) and one short-story (Closing the Big Bang) in the Space Travelers Anthology.

This StoryBundle is a joint promotion that gets 10 very affordable books in your hands, and helps you discover new writers along the way.

More details about how the Space Travelers StoryBundle works for you are explained in last week’s blog entry. The gist is: you pay what you want for the ebooks, and they will get into your reading device, whatever formatting you use. This helps the writers get new readers.

As for discovering new authors, I already knew Kristine Kathryn Rusch and Dean Wesley Smith, and they are entertaining and never dull. I discovered Robert J. Jeschonek, Lindsay Buroker and Leigh Saunders for their short-stories in anthologies.

However, I will discover Kristine Smith (I met her in 2006 at a convention) with this StoryBundle.

I can’t wait to dive into those new, exciting novels!

A Delectable Issue of OnSpec 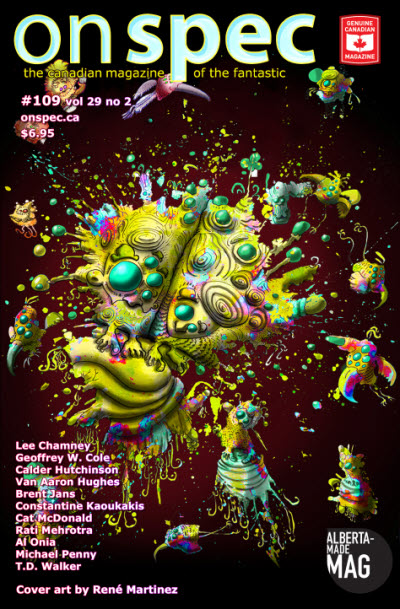 Although I regularly miss the submission deadlines at On Spec, I do recommend this Canadian magazine published in Alberta.
I appreciate the work of Diane Walton and Barb Galler-Smith, whom I have had the pleasure of meeting at Canadian conventions, but many others writers, artists, editors are dedicated to making this magazine a success!

I read from one cover to another this number 109.

Sinkhole by Al Onia, takes place in Australia on desert background, where a meteor absorbs all the matter around, creating a hole. The story waves its way between the points of view of the scientists summoned there and Allan, an aborigine working at the cultural center built near Uluru Rock, who trusts in his spiritual traditions to ward off the threat.

Konstantine Kaoukakis’ non-fiction article To boldly go where no teacher has gone, gives a perspective from an English teacher who integrates fantasy and SF reading in his classes, genres that fascinates students who would otherwise be bored. And what efforts to get this new course accepted!

My favorite story, Joyhound, by Calder Hutchison, is a jewel of SF and black humor in a mafia setting, fedora hats included.  Imagine a werewolf who emits pheromones that make him so irresistible, that his prey, bathed in an ineffable happiness, strives to be eaten… In addition, the predator’s saliva is a painkiller. What a sublime treatment, what a heroine in shades of gray! And what link with the murky underworld of mafiosos? Read on and be happy!

Another story, “Two from the Field, Two from the Mill“, by Geoffrey Cole, who loves hockey a lot! Imagine that one night, all the dogs ascend to the sky and disappear, in a “rapture” way. Dogs, these devoted beings, left a big hole behind them, which even Christians seek to fill. A professional female hockey player (we have a visionary author there!) who also lost her dog, must manage the situation in her small town before it turns sour. I had read two stories from Cole, and I appreciate his humor and sport settings. The title hails from a biblical quote (Matthew 24, 36-42).

The other stories are Lee Chamney’s When they burned my bones, in which ghosts experiments such a difficult after-life, but it’s better than nothing! Fear and zen, then.

Spirits’ Price, by Van Aaron Hughes, a fantasy story, where you can get your desire with a well-told tale that appeals to spirits, but there’s a price tag to this. And what is the price of passing on the gift to your descendance?

Death is a Blindfold, by Rati Methrota, a story of encounter of the second type that leaves the witnesses a lasting impression. But if no one believes them and the ET never come back, why stick to it? This author, interviewed in this issue, has been inspired by reports of UFO sightings.

Two interviews complete the issue: Toronto-born Rati Methrota, a resident of Toronto, and René Martinez, the Cuban-born, Toronto-based cover artist who produces colorful and generous illustrations worth of Gaudi.

The prologue by Brent Jans, the organizer of Pure Speculation is worth the detour: “Everyone deserves to be Conned. Brent realizes that his event, which rolls very well, lacks diversity. He will fix it, even if it means skipping a year. The best sentence:

“I struggled with the idea that I was somehow to blame in an SF culture that could somehow accept aliens and elves, but passively and actively made it unsafe for women, people of color. LGBTQ2S, our Indigenous population -basically, anyone who was not me.”

We do not often get the point of view of an organizer, and his efforts to make his event accessible (like what I witnessed at the Utopiales in Nantes, who have sign language interpreters, and the first two rows of seats reserved for deaf people.)

By moving the premises and cutting the entrance fee, Brent made the Pure Speculation Festival accessible to wheelchairs, and for many low-income fans. And no, he did not regret it nor di he get bankrupted. Those are very encouraging words to read these days.