The call of adventure -1 : Starship

You read that in every How-to novel writing advice, the call of adventure that the hero or heroine spurns at first… I wish to share this incredible moment when I boarded and rode an experimental hovercraft.

The name of the vehicle was… Starship. Don’t laugh. It was a miniature orange two-person hovercraft, in demonstration at an event organized by my father (a hovercraft specialist) for an aerospace association that do not exist today. A jobless geographer atthe time, I had volunteered to help him with small things. We were in a hangar by the St-Lawrence River, under a gray sky.

One visiting engineer had been invited to test it, but he said he would get drenched (and he was an experienced, gray-haired guy, I suspect he knew what to expect bouncing in a small craft next to the engine, while I didn’t). So, I offered to go instead. I put on a thick and loose and dark wetsuit over my light and elegant September clothes and sat behind the pilot.

The first assault on my senses was the deafening noise of the main engine (see in the pic, right in my back) and the propeller pulling the air down to lift the hovercraft, screaming at one hundred and ten decibels that made even the red composite hull shake. It was impossible to talk, and the earmuffs might have been cotton candy for all the protecting they did.

After the flat concrete, the cold, cold September water of the St-Lawrence River rushed at us, sprayed droplets everywhere. Water seeped through the seams of the wetsuit, enclosing my legs in a moist embrace. The smell of tar and exhaust, the stench of dead fish coming from the posts of the bridge we were passing nearby gave a moldy taste on my tongue. But nothing beat the excitement of flying over the water in an experimetal hovercraft!

The hovercreaft jumped over chopping waves, propelled so fast every bone of my spine and basin was vibrating at the same pace. I grabbed the hull on my sides, not sure the orange lifejacket would be of any use if a sudden swerve shook me off. The craft reached the faraway bridge at piers in less than a minute!

At our dizzying speed bouncing over the wavelets, the air rushed at my face with countless droplets, my carefully combed hair was askew, but I still remember today how exhilarating those five minutes had been!

My grateful thanks for the gallant Starship pilot, who may have retired since the pic ws taken (I didn’t get your name, alas, so say hello if you recognize yourself!) Note how on the pics the pilot did not wear the earmuffs; he probably lent those to me for the test drive.

And kudos to the fellow engineer who took this picture and sent it to my dad, Jacques Laframboise, a few weeks later. We thought you might like this as a little memento of a happy day, he had written, noting the dsate September 23rd, 1987, and a time 2 min 45 sec, which may be the time elapsed in the hovercraft test drive. Alas, that friend didn’t write his name, and my father has flown into the great unknown in 2014.

It had been 34 years, and I still count those three minutes as the most exciting in my life!

A close-up of a magnificient Lily in full bloom. Picture taken near a garden, in Montréal. I was on site for a comic arts event, the FBDM.

Splendors and miseries of the signing table

Another bookfair is coming at Montreal! And, if you are a lesser-known author, you might experiment this:

One hour at the signing table.

I drew this page after some signing sessions for my novel Piège pour le Jules-Verne, my table close to the Harry Potter stand.

Jean-Louis Trudel, my fellow SF writer, had accepted to figure in the comic, and even contributed to the scenario.

This page was originally published in a fanzine, (MensuHell) and found an echo with many friends and comic creators, among them, Christ Oliver , who did a piece on it (coming on my next post).

My profound sympathies to the all writers who will experiment that desertic bookfair at the Salon du livre de Montréal , very well frequented. When there are more than 800 writers vying for the public’s attention, it is bound to happen…

Meet my fans: the paranoid fan!

Another close encounter at a bookfair… 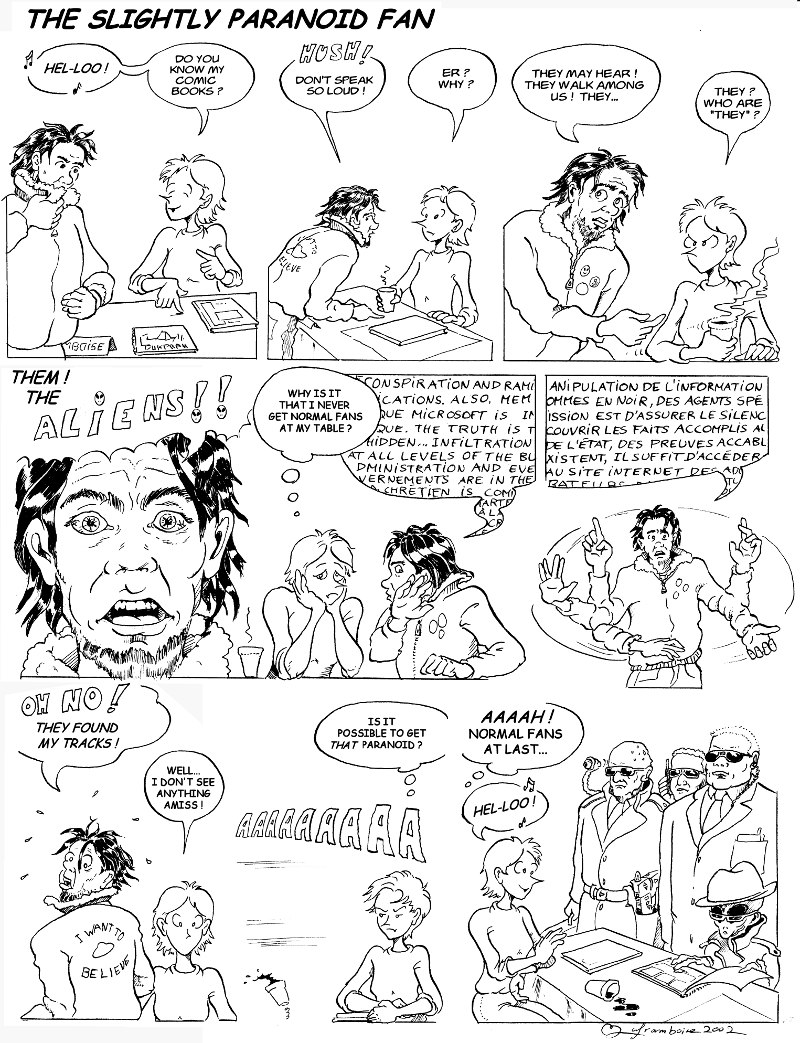 It really happened to another science fiction writer. I took some liberties towards the obvious flying saucer conspiracy theory…

It is more difficult to manage than the Zombie fan, or the angry fan (to come) because you want to stay polite, but the obvious awkwardness of the paranoid fan pushes other visitors away from your signing table!

And yes, there is a direct X-Files influence on that one! I loved the series despite the dark angle, for reasons too numerous to cite here. The humor, among them.

The 67th WorldCon Anticipation 2009 attracted some  4000 fans, artists, writers, editors at Montréal. I had the chance of crossing many orbits and meet new friends.

Jean-Pierre Laigle, who crosses the ocean regularly to see us.

Jean-Pierre Laigle, after his readings, and the savante folle (photo by Georges Bormand). Note the nice Frankenstein T-shirt hidden under the pass

My pics of Mark Shainblum are not good, so I sent them directly.

I talked a little with Alain de Bussy, and Jean-Claude Duniach.

I missed several colleagues : Joe Mahoney, Paula Johanson, Mehdi Bouhalassa, … I cautgh a glimpse of Cory Doctorow, no time to buy his latest gem. And what of René Walling, this hero organizer? Always running to and fro! 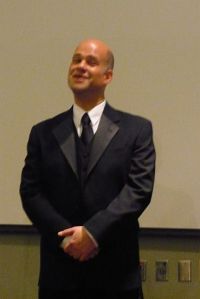 Yves Meynard in tuxedo, ready to host the Hugo ceremony!

Jean-Louis Trudel in all his prestance, at he end of the Boreal Congress.

Jean-Louis did also help a lot the organisation of Anticipation.

I took a last companiable meal at the restaurant La Popessa, with Mario, Claude Pelletier and Alison Sinclair, a Victoria moved to Montral Sf writer.

And I met a fan at Boreal, wearing one of my own designed Comic T-Shirts !

Benjamin sporting a  T-Shirt of the Comic (Micro computer student committe of the École Polytechnique of Montréal)  signed Laframboise. The disembodied hand on his shoulder is my own…

The visitors from outer (canadian) space 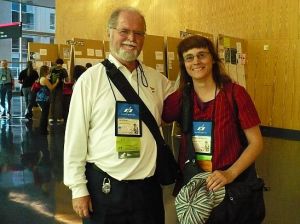 Larry Niven. I met him for the first time at the Torcon3 (the Toronto WorldCon).

James Morrow, writer and philosoph; I recently discovered his ironic prose. I already have a few ribbons under my pass…

James Morrow and his wife, Kathy 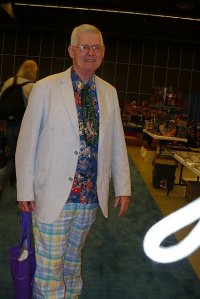 David Hartwell, Tor Books editor, with his eclectic taste in clothes. Fortunately, Don Cherry was elsewhere! And… is that a squid on his tie?

Élisabeth Vonarburg with David Hartwell at the Hugo Ceremony.

David Hartwell’s impressive collection of ties, with his fashion credo. 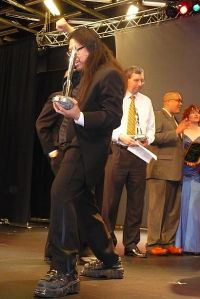 And… Neil Gaiman. My husband Gilles was the one who introduced me to the Sandman series (He even downloaded the complete script!)  I didn’t get much time for comics talk, since Neil was well-entoured and certainly tired from his day!

Nevertheless, he was very nice to me, even congratulating on my Aurora win! A nice fan took the photo.

I want a little rocket, too!!!

A steampunk vision of Montréal

This steampunk vision is my collaboration to the Anticipation WorldCon, in August 6th to 10th, at the Montréal Palais des Congrès. It is the cover of the third progress report. The drawing was made with ink, then scanned, with the colors digitally added.
The Aurora Awards will be announced in the evening of Friday the 7th. Do not push at the doors: the ceremony will be held with a banquet, at 40.00$ per guest.

There is an exposition including my books, at the Bibliothèque et Archives nationales du Québec called Virginia messagère des étoiles, underlining the Year of Astronomy.