Running at daybreak on August 11, I had the occasion to observe a strange meteorological phenomenon.

I was running on a small side road, making 3 km circuits. The morning mist floated above the hay fields, a large open space. Then the sun rose, and I had the wonderful surprise!  END_OF_DOCUMENT_TOKEN_TO_BE_REPLACED

So this was my first ever marathon, completed in a whopping 5h45min! (See my finish video and some pictures here, the exact personal time is 5h42:52)

I haven’t decided yet if I want run another full one. As you can see I got stiff knees for a few days post-race. But I was fairly better at the Sudbury French bookfair!

However, half-marathons are perfect for me: I completed the first part of the race in a fairly good 2h20!

The training (with a half-marathon group as there was no full training instructor available last January) took long hours from my writing and comics creation. I’d love to run a full 42,2 k under a more favorable weather!

My next race is this Sunday, a 15-km at the Bread and Honey Festival, of Streetsville.

A marathon is like two half-marathons, one after the other, right?

Well, my legs did not agree with this optimist assessment!

Running Up an Historic Trail 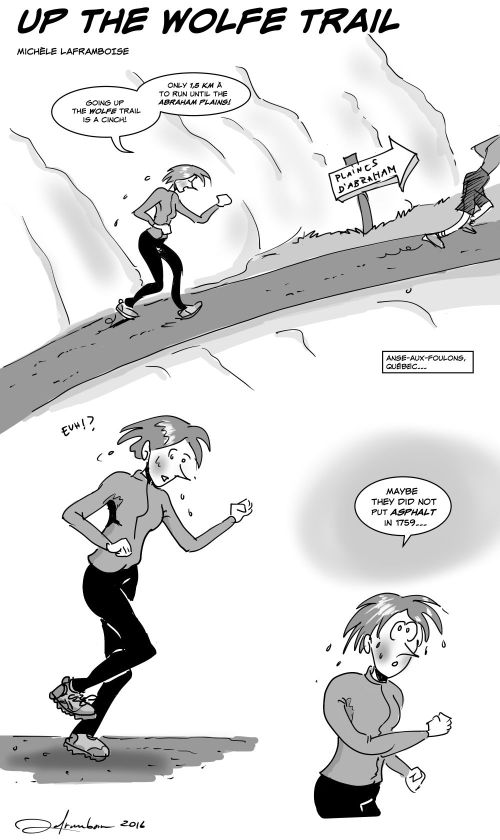 And to think the British brought their cannons up in pieces!

I ran up the Wolfe Trail,  1,5 km of slope, to train for my upcoming marathon, along with my cousin who is an experienced marathoner. It concluded a 16-km run…

We ran from Anse au Foulon, and went through lots of little signs that explain in detail the operation of passing by this trail to attack Quebec defended by Montcalm. Obviously the trail was not paved …

Nevertheless, I thought about the soldiers wearing those heavy loads and equipment, and about the defenders of Quebec who risked (and lost) their lives.

It’s always easy to say in retrospect, long after the lost battle: “Montcalm should have done this or that, he should wait for reinforcements to Bougainville and Levis instead of an exit …”

But without cell phone, while the besieged Quebec residents lacked everything (Wolfe had burned the fields and razed villages up to 100 km downstream of the city), the Marquis de Montcalm could not actually * know * if his allies and volunteers had not themselves been decimated, or whether the British allies Iroquois warriors would not come later join them to form an unassailable mass.

So he ordered a sortie against an enemy superior in number.

(The two leaders were killed in this battle, which was rather short as columnists reported it: about 15 minutes, for the French engagement.)

I am really feeling the exhaustion of the training for the upcoming marathon, hence this shortened comic!

It seems that my marathon training is getting in the way of drawing!

The event is in three weeks…

Yes, we do watch the X-Files !

The Resolution Run is an annual event by organized by the Running Room. They hold bi-weekly runs open to every one, and in winter it is better to run in a group, because of the danger of falling on ice.

There was not much snow at the 2015 RR, but half-melted, darkened snowpacks were abundant. Despite what the comic may let you think, there were crews presents, cheering us at various points on the 5-km route, so no “dark” places.

It was a good run with the moon peeking through the branches, ominous and magnificent.

The joys of jogging… in winter